The Blue Pool was once a “locals” spot where if you were from the area you knew about it. Now, it is totally loaded with people so much that is it barely useable.

Using google maps (and a chat with a mate) I found another spot on the same river that looked quite good. It did not dissapoint. It was one of the prettier spots we’ve been to swim and Maggie had an absolute ball.

The sun set behind the escarpment early in the afternoon so the lack of shade wasn’t that noticeable for Ed. The parking was pretty tight but it was a 35 degree day on a Saturday close to the Christmas and New Year break.

Overall we will definitely be back.

On a hot day we got some advice about an interesting place to swim. Just off the road with a few flat spots to the car is a clear river. It was a great place for a picnic and Ed even managed to get his feet wet. It was a bit windy and not a lot of shade, but overall much easier to manage than the beach.

Across and 26 & 27 December Pa and I took Maggie to the Seaspray for a swim, and on 2 January we went again with Claire and Ed.

The beach is fast becoming Maggie’s favourite thing, and 24 January we went again for Australia Day.

Ed was less impressed with the wind and sand, and spent more time in the playground.

Maggie’s energy was at a 10 the entire time, there is nothing that she loves doing more than running and jumping in the water. She even tried a bit of boogie boarding and did quite well at it.

I tried to take out deeper once and she tried to pull against my hand at exactly the wrong time and got a “wipeout” which dampened things, though the fish and chips afterwards made up for it.

19 December we went with the following families: White, Lewis, Elliman, Bryant and Black. The girls swam even though it was not overly hot. Maggie won an inflatable shark in the random KK draw and thought it was the best thing ever. I would have loved to have had a chance to catch up with everyone moreso but I was supervising her in the water the entire time!

7 January we went with Ben and Olive. It was colder than forecast and around 22. The water at the Weir is not as cold as one might think. The highlight was Maggie and Olive putting their head underwater and saying what they could see (big fish, lobsters, etc)

23 January we went again when it was really hot, Gaga came with us which was nice. We used, for the first time, the awning I had bought years ago. It was very crowded, but with the awning we were able to have shade, and of course the Weir is very big.

It was obvious that in the covid-19 world soon a lot of activities that we took for granted would be finished. We drove down to Sale to see the Grandparents for what seemed to be the last time in a while. We made sure we got a trip to the beach in.

It was a lovely day and the wind was minimal, which is saying something for Seaspray.

Maggie had a lot of fun playing in the sand, I taught her protect the stick and she mostly enjoyed running back and forth in the waves and screaming.

Claire (pregnant) mostly lay on the picnic rug with Gaga. Pa and myself splashed around with Maggie and it was a really nice day all around. 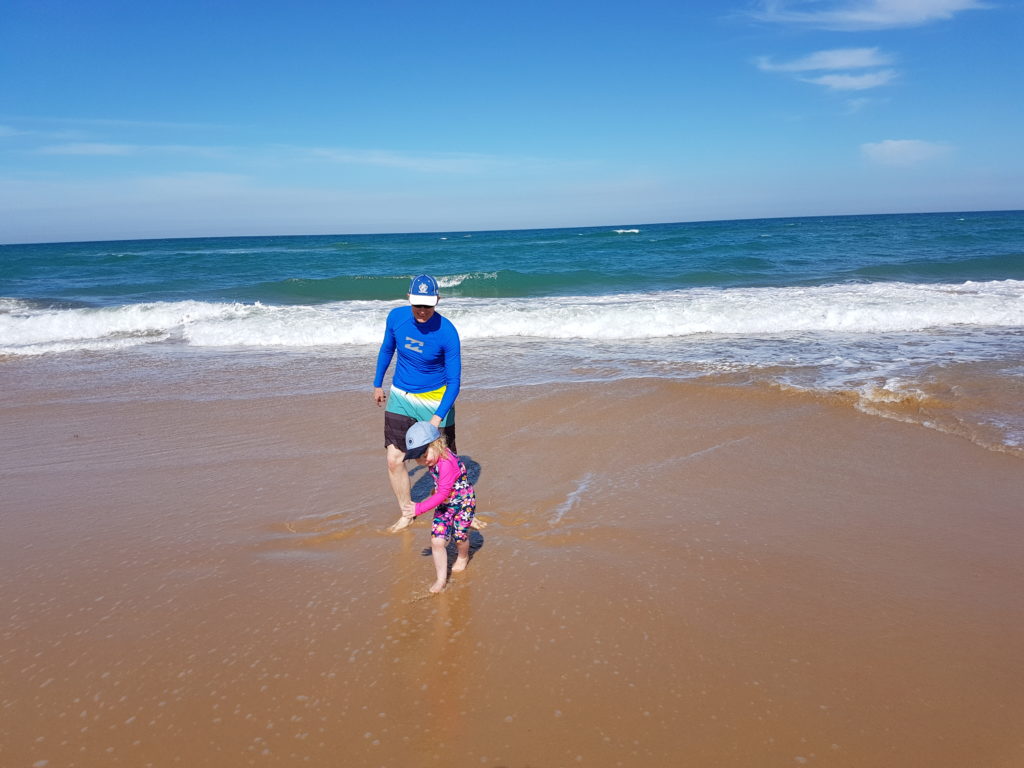