Brucesta had arrived in Darwin, him being a long time game fishermen, he was pretty keen to check out some action in the bluewater, so off we went in search of some billfish. Though personally I was more keen on some mackerel or tuna, as my freezer is pretty empty. Though the water wasn’t really blue. The large tides and decent wind meant it was more of a greenish brown.

…and the water wasn’t the only thing that was green. The rough ride out there resulted in me getting a little seasick. How embarrassing. I haven’t been seasick in years, though these days I am primarily fishing in estuaries.

So we trolled around for a while without any luck. There were some birds out there but that was it. Was cool to see how gamefisherman operate, I have never really seen it before, teasers, skipping garfish, etc.

We moved on to baitfish some reef over the low and I started to feel better. But there was no action there either. We did some drifting without any luck. We finished on some reef near Mandorah where Mud caught the only fish of the day… see photo

Random story of the trip:
Not much to tell here so here is one from the night before. Our injury-ravaged basketball side won our first basketball game on Friday night. A few of the boys were going to have drinks to celebrate. I gave them a spray – that is not the proper way to treat your body! Food, ice and rest!

I just thought it sounded more professional than “I’m going fishing first thing in the morning”. 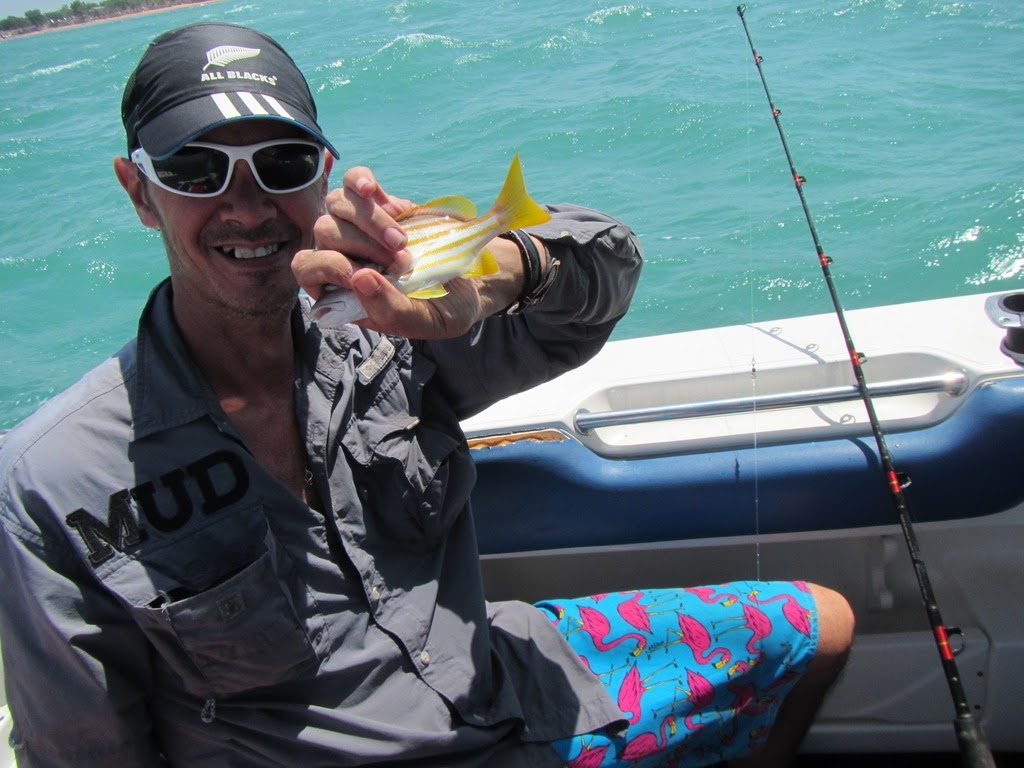 Mud and I decided to head out again, once again with somewhat awkward tides. We took some bait and decided to chase some Jewies out at Leeder’s creek.

Started with a troll for some barra on the way there, but it was quiet. We found our hole and down some bait and pulled out one or two smaller catfish. After that we moved out to the mouth but it was quiet. Suddenly, both Mud and I were on with decent fish.

I could tell that mine was most likely a large catfish which was disappointing, but his definitely wasn’t. It was charging all over the place, making me hope we had the elusive Jewfish. As it turned out it was a good sized black tipped reef shark.

I think sharks are good eating, most Victorians tend to agree. It isn’t that common in Darwin for some reason, I guess because there are a lot of good eating fish here. I asked Mud if he was going to eat it, and to my surprise, he was on board with the idea. He agreed that sharks are damn tasty.

I am not sure if this inspired me or muddled my brain, but the next thing you know I am necking the catfish, everyone says those golden saltwater ones are good eating… I think I am going to call it cobbler from now on. Sounds better, right?

Otherwise it was fairly uneventful. Some catfish were caught, plenty more trolling for barra happened, a bit of flicking, and that was the day.

Got:
Mud: A good shark, catfish
Me: Catfish
Alice: Catfish

Random story of the trip:
When Mud went to get the cat and I was in the boat, I noticed some swirls of water near the rocks. Had a cast and I pulled out a small cod. I had nearly gone the trip without getting one, what can I say, I am the small cod whisperer. 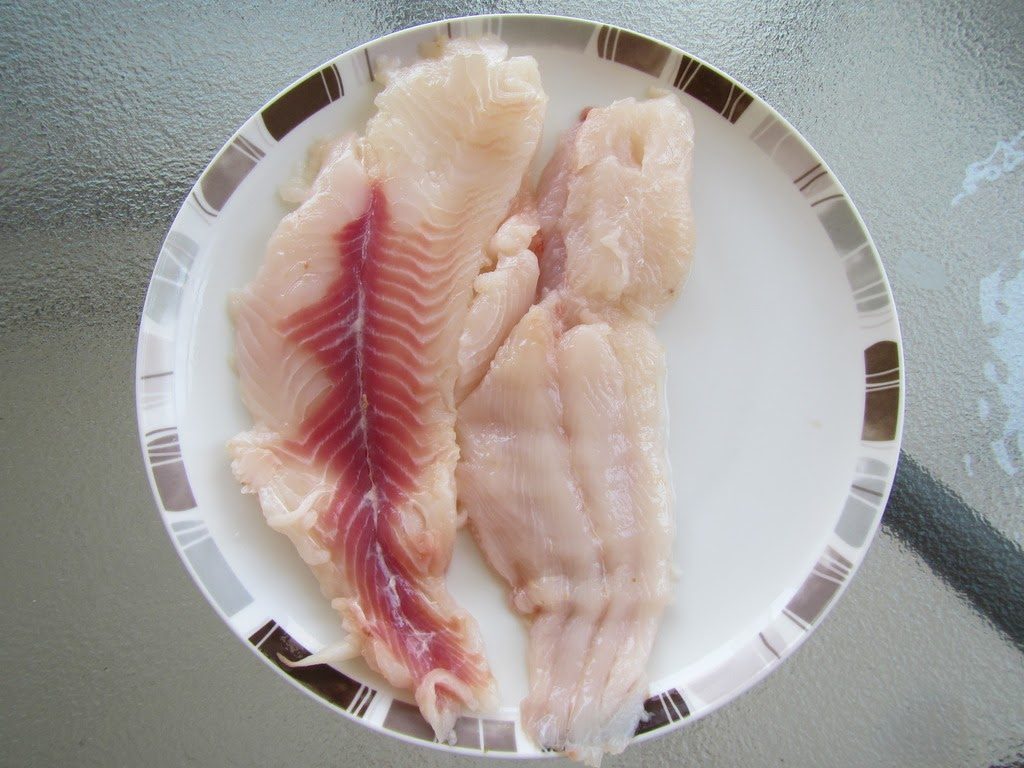 I was supposed to be going camping this weekend, even took the Monday off work, but as it turns out the car got a crack in the radiator. I found this out on Friday. Meanwhile Brucesta had just moved from WA to Darwin and had asked me about some fishing. Since I didn’t have anything planned we made some last minute decisions to go barra chasing for the 11.30am lock in.

At first it was slow going, I hooked a few small cod (I seem to have a knack for it). A few hours of not much and it was across the low Brucesta managed to hook a fish that buried itself under a log. Since it was 1m deep it took me about 10 minutes of fishing around with the net under water to dislodge it, actually we gave up, but when Brucesta tried to break his line off he managed to get the fish out. Turns out it was a 38cm barra, his first NT one, and at least we were on the board.

As the water started to roll in we heard the occasional boof and we trying to hook something up. We were at a branch in a creek where the craziest thing happened. About 5000 tiny mullet came pouring into the creek. For about 5 minutes we were hearing a boof every 30 seconds. Then for 2 minutes after that, it was a boof every 2-3 seconds. 5 minutes after that it went back a boof every 30 seconds, before dying off. You could physically see the 60-80cm barra jumping. Over and over. It was crazy, they were everywhere!

And yet… they would not hook up. I have never seen anything like it, if I had of known feeding frenzies could go like that I would have assumed it would be easy to get a fish. But we got nothing. Another boat near us got 2 whilst trolling so we swapped to that, I got a decent blue salmon but no barra.

I still just can’t believe I saw that. I wish I had a go pro or something as it was just so insane. And yet no barra from it. It was the most disappointing thing that happened that day, and I’m a North Melbourne supporter.

Got:
Brucesta: 38cm barra
Me: Blue salmon for dinner

Random story of the trip:
A boat in that creek had their nose about 2 metres in the air whilst motoring, their outboard was 75% under water.

Claire and I finally had a Saturday together, so we decided to go out on the boat. Claire had actually never been out on the boat before, we weren’t sure how she would go.

I decided to hit a few more blue water locations, as it was across the low and therefore a bit prettier. It wasn’t a fishing trip, but I was planning on having a bit of a cast around.

We hit this nice area of exposed rocks and I flicked around a bit. Got a few small items like a cod and a blue bones. Finally hooked onto something decent, but it spat the lure half way through. Really wish I had of known what it was. Soon we stopped for ‘elevensies’ and Claire had some beer, water, and food. Then the wind kicked up. It wasn’t long before she started to feel sea sick, and that was the day. We tried to go up some mangroves, that stopped her feeling sea sick, but the sun was out and so were the bugs.

So we decided to call it a day. Cracked my first can at the car wash.

Mud had done well recently at billabong, so we decided to head there in the boat and see what we could get. The plan was to get there before dark and fish it first thing in the morning. That didn’t work too well as Mud managed to get robbed the night before. Not too much was taken, but a set of keys were. So he got some locks changed and instead we got there in the arvo and fished until dusk. A lot of wildlife around, wallabies, jabirus, a few very pale crocs. Yeah, the fishing was that bad I am now discussing wildlife. Anyway Mud managed to get a decent Toga, we both got some large archer fish, but no barra.

I like to look at the positives of a trip… no bait, freshwater, no fish = quick clean up.

Story of the trip:
I had to steer the boat into the perfect position so my deckie could take the perfect selfie… what is the world coming to? 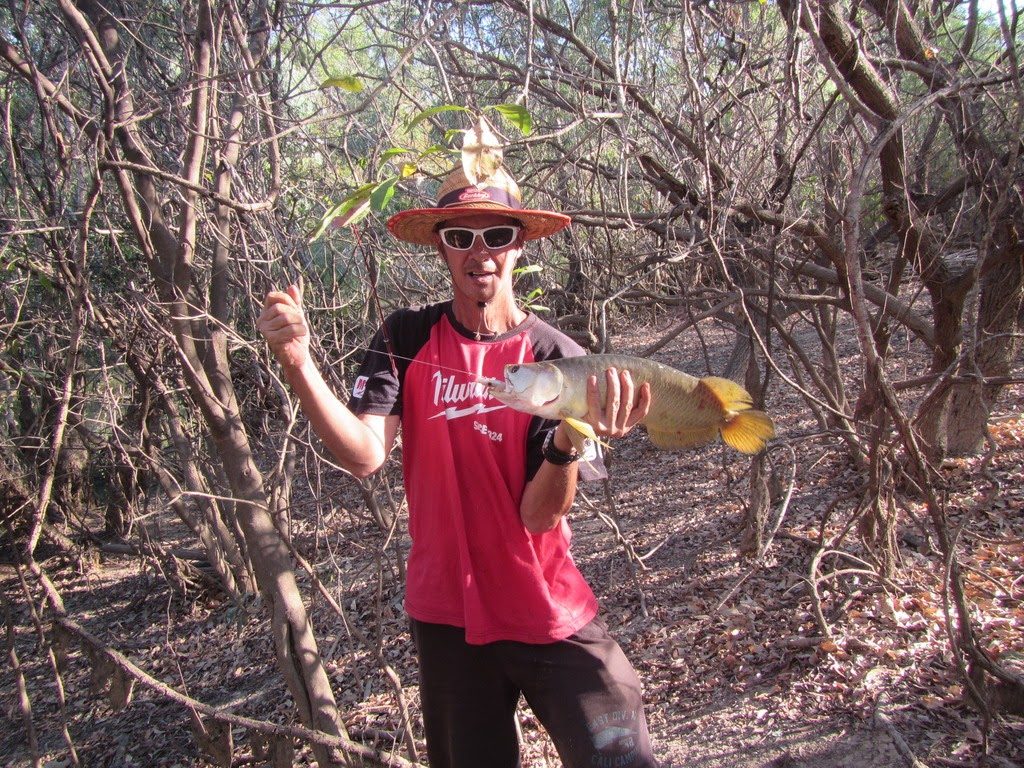