The wife and I are very different in some ways. Whereas she had 3(!) hens nights with various friends in various locations, I did not want one. Strippers? Might as well drink non-alcoholic beer. But she was insistent on me doing something… hey no worries what about a chartered fishing trip?

We set off in glorious weather, having been assured the tides were not ideal. First place we hit a few of the boys pulled up some thumper trevally. The guide was dissapointed and we moved on.

At this point I was thinking of forming a mutiny. Firstly I hadnt caught one yet. What if that was it? Secondly they cook okay if they arent refridgerated. Thirdly nummas/cerviche is awesome. Fourthly how sure he could be we could get others? But no, he wanted it for bait…. so me and Chops (a fellow Trevally lover) waited.

Second place we got, nothing.

Third place we went to, a few of the boys hooked Nannygai. Success!! And a few more… soon we were smashing them! But not poor old me….

Eventually I got onto a 42cm one. Can’t complain. I took a break as I was hogging the rods. I found out later the rod that I had was ordinary, but in 60m of water I couldn’t tell.

Soon my mate tired and I grabbed my rod again… got a slight nibble and I increased the pressure and hooked the fish. Suddenly my whole body was clenching trying to hang on… he pulled off some line, which was funny as the drag was so tight I broke it easily on a snag. I wound and winded. Over and over. We were fighting sharks, and I was doing such and ordinary job of getting him up quickly I didn’t think I had a chance. Wound and wind. Over and over. Soon my whole body ached. The skipper was shouting to me to stop being a princess and ignore that lactic acid. Easy to say… this might seem dramatic but
a) I like a good story
b) It was a really ordinary rod and reel
As I wound that bad boy up inch by inch I was hoping it was something decent otherwise I would look the fool. Part of me wondered if I had a small shark as it kept taking line, and that drag was DAMN tight.

When I got it to the surface…. far out… an impressive (68cm) Coral Trout!!! When I got it in the boat, I mean, wow, what a rush. I remembered why I love fishing, why I love the Whitsundays, and that bait fishing / bottom bashing isn’t all bad!

From then on I hit the beer (my first, stop judging me, fishing comes first on these things) and let everyone have a fish for a while. My cousin pulled up a mammoth Nannygai, otherwise everyone was pretty much hitting one after the other. The trick was getting them past the sharks. I spent a bit of time teaching the newbies what to do, one particular highlight was pulling a fish past two sharks who were charging it.

Soon a few people got tried so I hit the end of the day, managed another 2 keepers and a 50cm sweetlip, which was pretty damn cool.

Got:
Me: 68cm coral trout, 50cm sweetlip, 3 40-55cm nannygai
Everyone: Lots of nannygai! And some Trevally. One more sweetlip.

Story of the trip:
Clearly my coral trout. I was so stoked with it. The wind was dead, the ocean was blue, just a great trip all around. 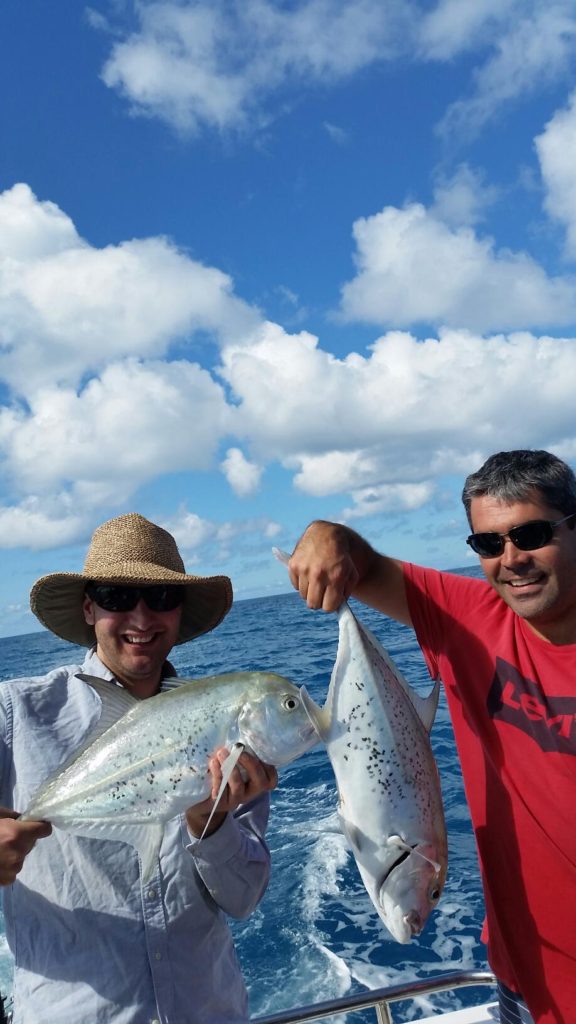 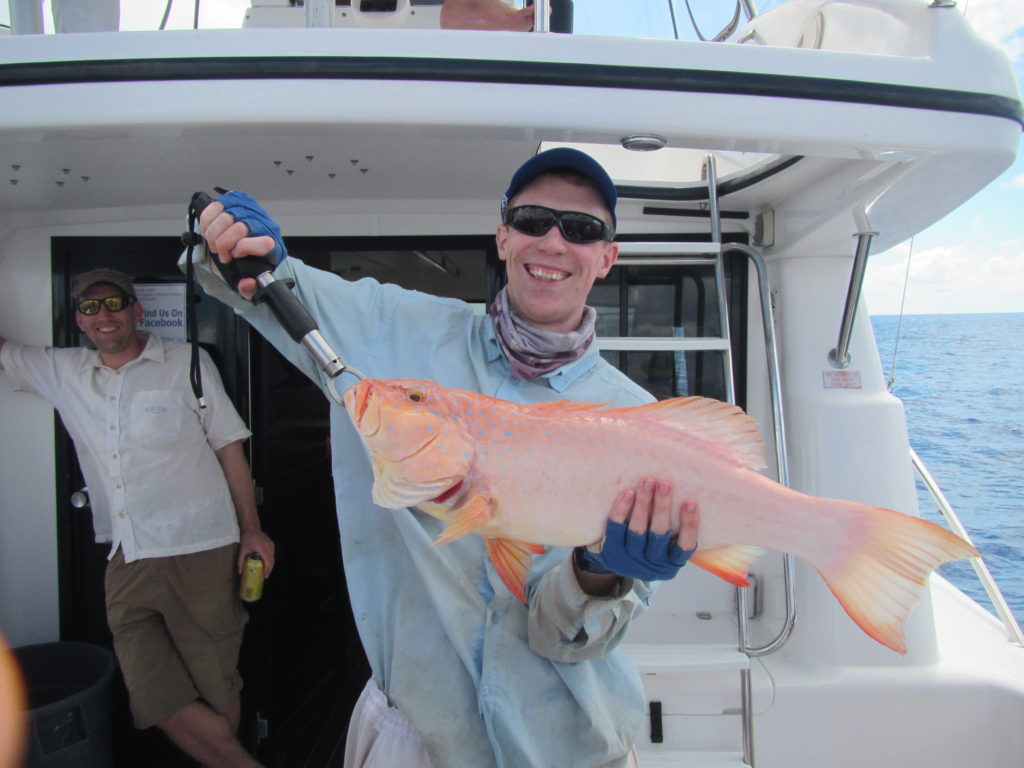 Me with my Coral Trout! 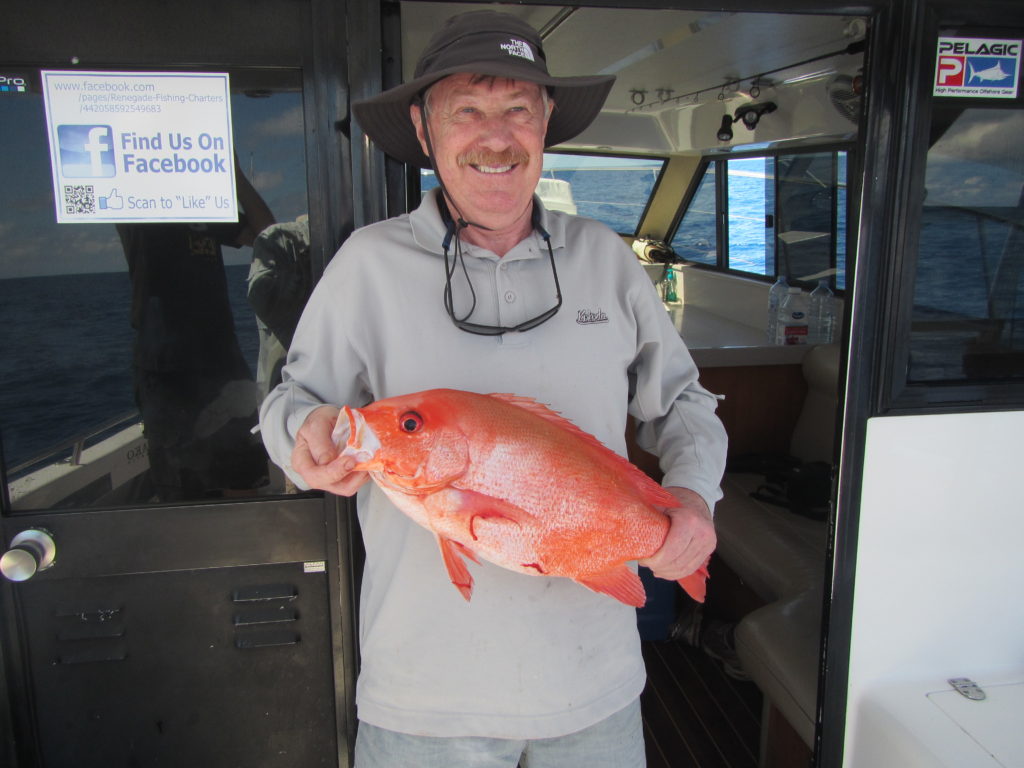 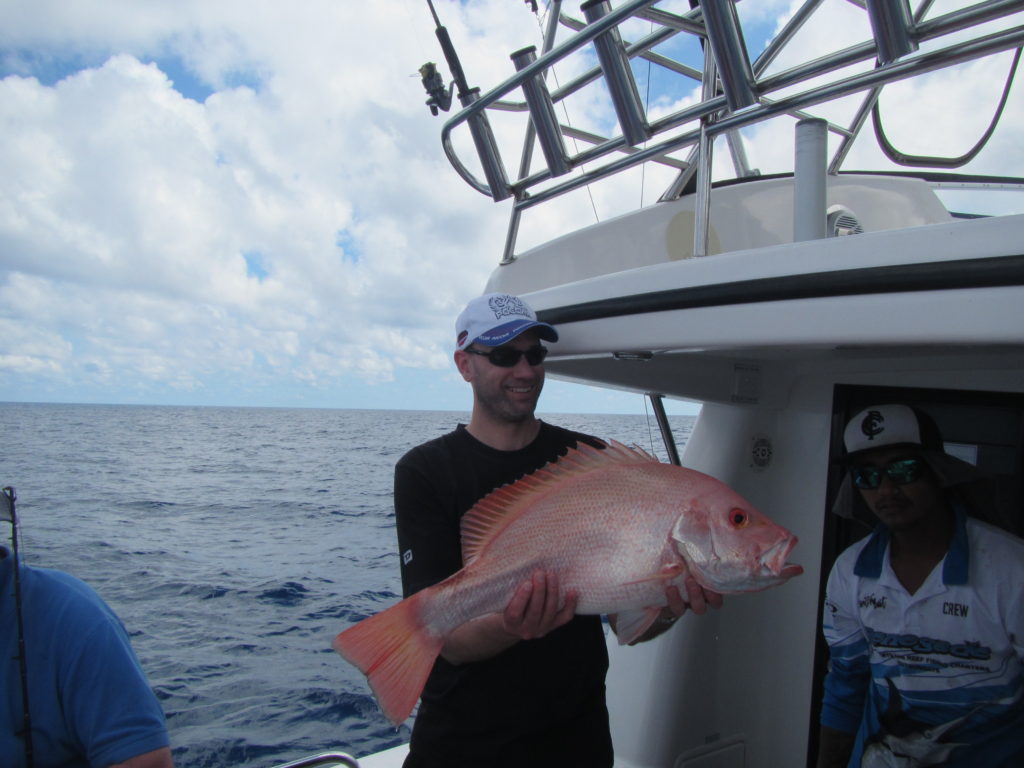 Cousin Gareth with the biggest Nannygai of the day, think around 80 to 90

My boss decided to take us boys out on an overnight fishing trip. Writing this in 2015 it is still the best one that I have done. Got there and fished for Barra for the day with lots of success (by my standards). Stayed the light and had a quick trawl in the morning. Then went goldie hunting.

Story of the trip:
Getting smashed by the goldie school! They busted me off and I quickly swapped to my handline, as we wanted to keep feeding squid down there before the school moved on. Nothing like pulling a double header up! 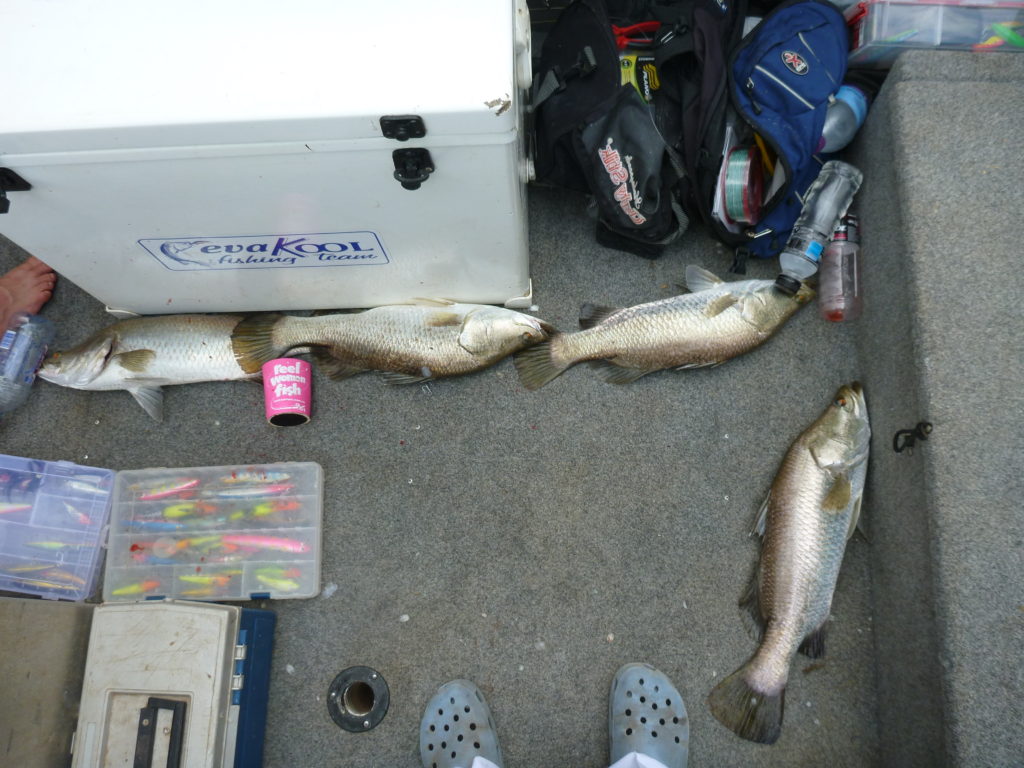 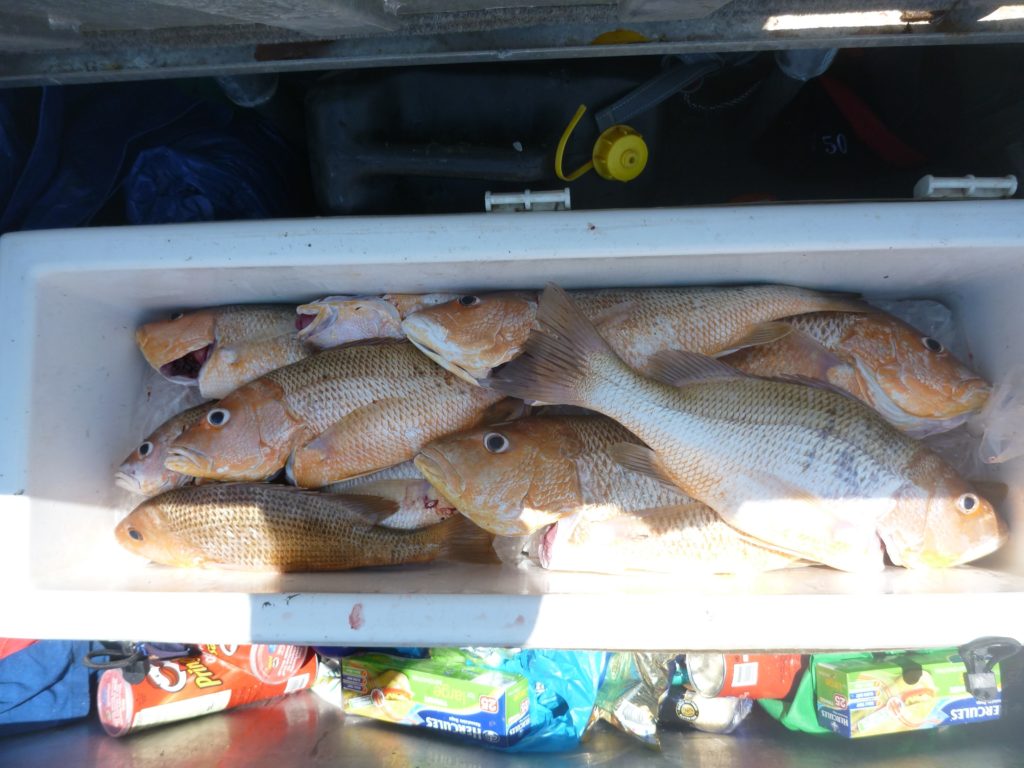 Always scary fishing at the end of December in Airlie, and sure enough, we got rained on. But it wasn’t too bad and was one of the best trips we had done.

As soon as we moored up I dropped some bait over the side and pulled up a 45cm sweet lip – my favourite. No one could believe that was where I got it, but hey, I’m just a pro.

If I hadn’t gone so hard on the piss the first night I might have been able to fish a great spot where my mate Judda pulled up Indonesian Snapper after Indonesian Snapper. All thanks to my home burley I will assume. 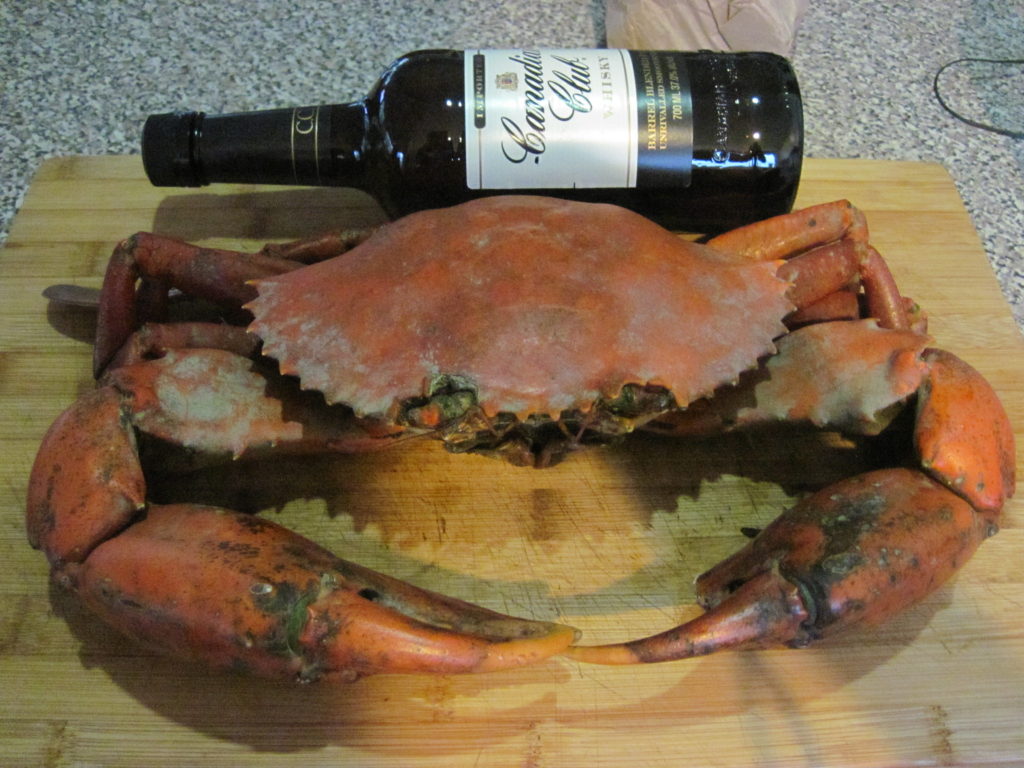 Got some huge crabs 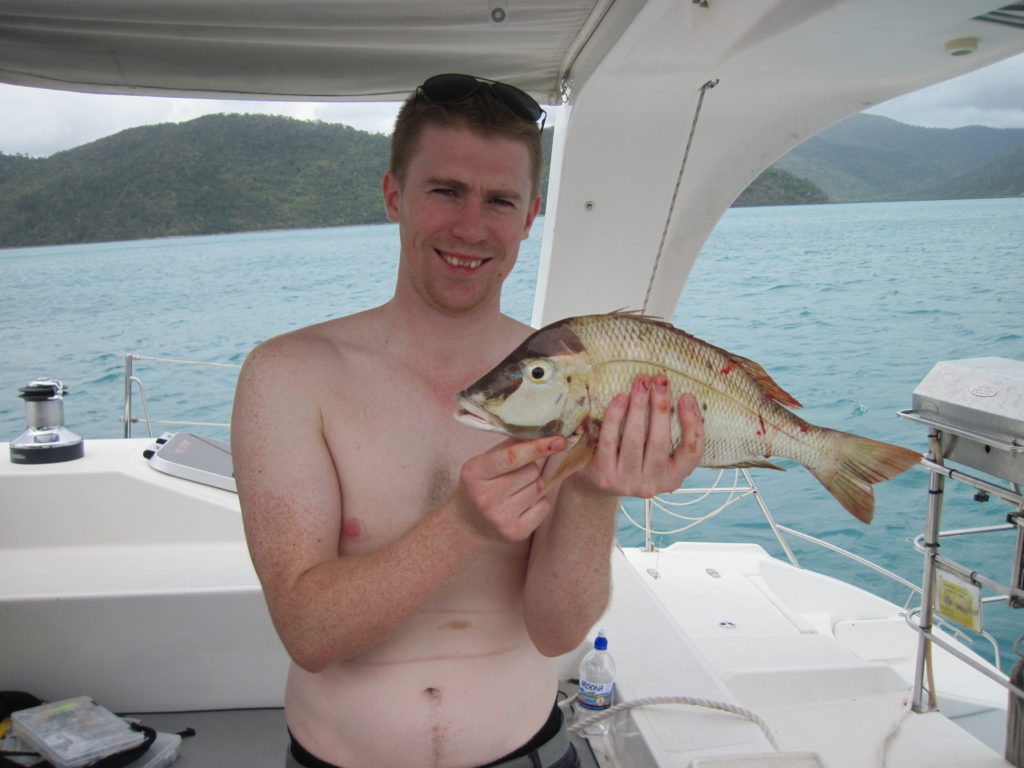 Never thought I would be uploading this photo on a website, check out the abs