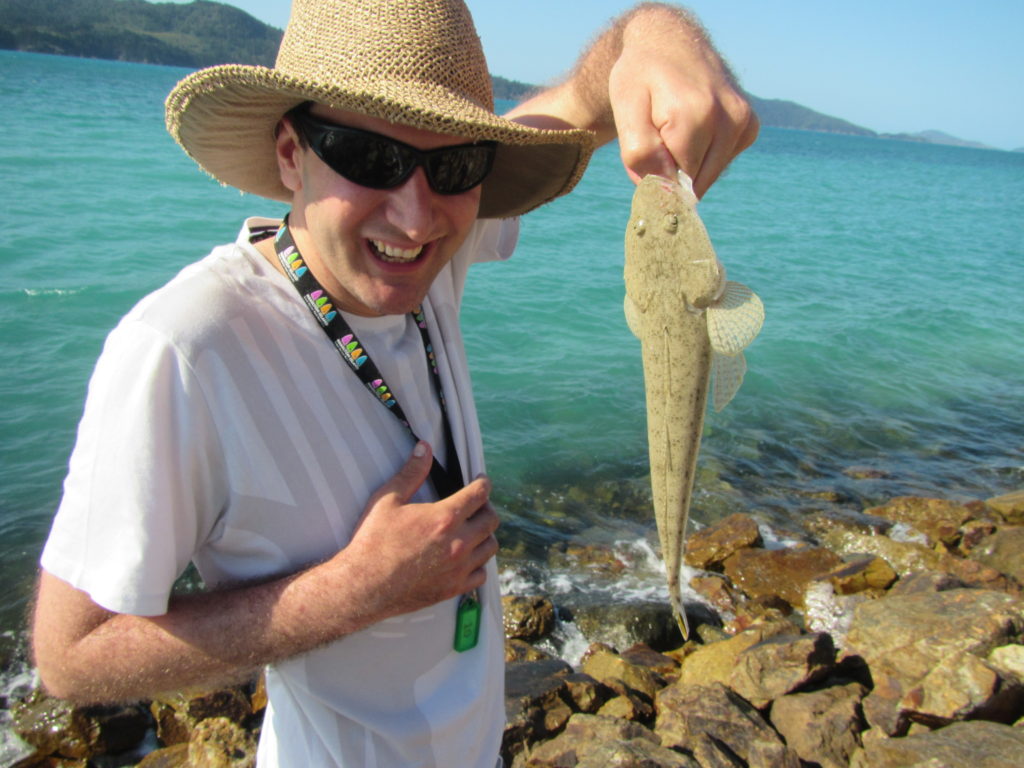 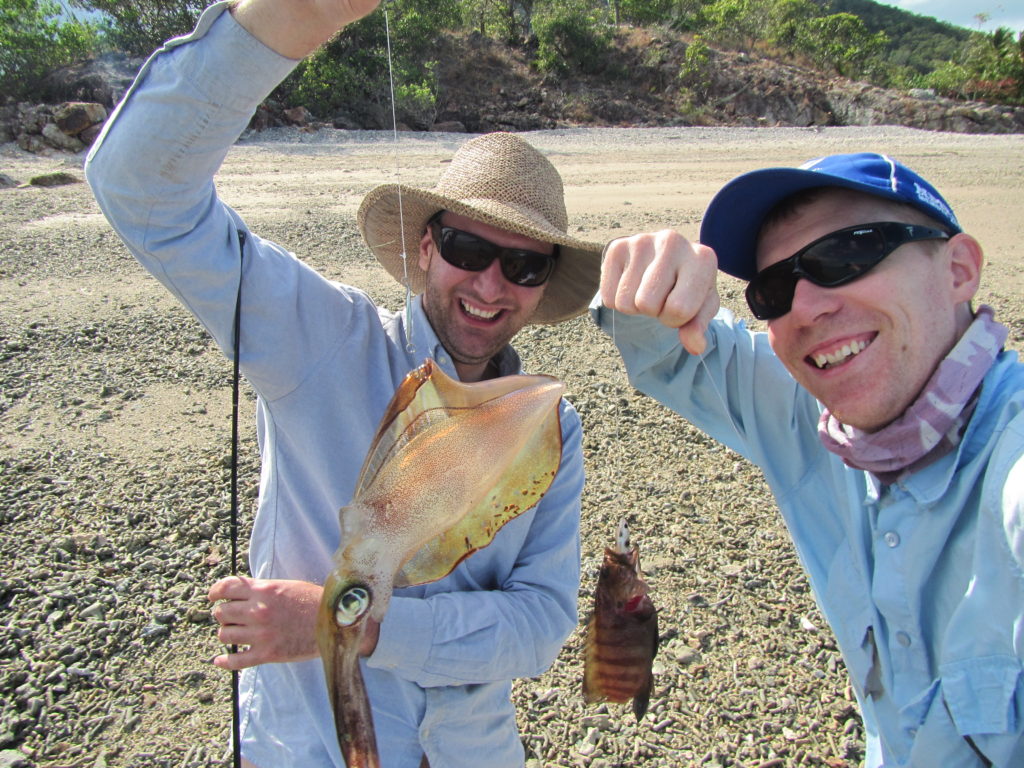 Seeing Jarrangbarnmi (which used to be called Koolpin Gorge) was at the top of my list of things that I wanted to see up here. It was cancelled on us once before, because they couldn’t remove a croc. And all the permits were booked out the last time we tried to go. We decided to book the permits for one night on Saturday and Sunday. It was nearly 5 hours from Darwin, but it was worth it. 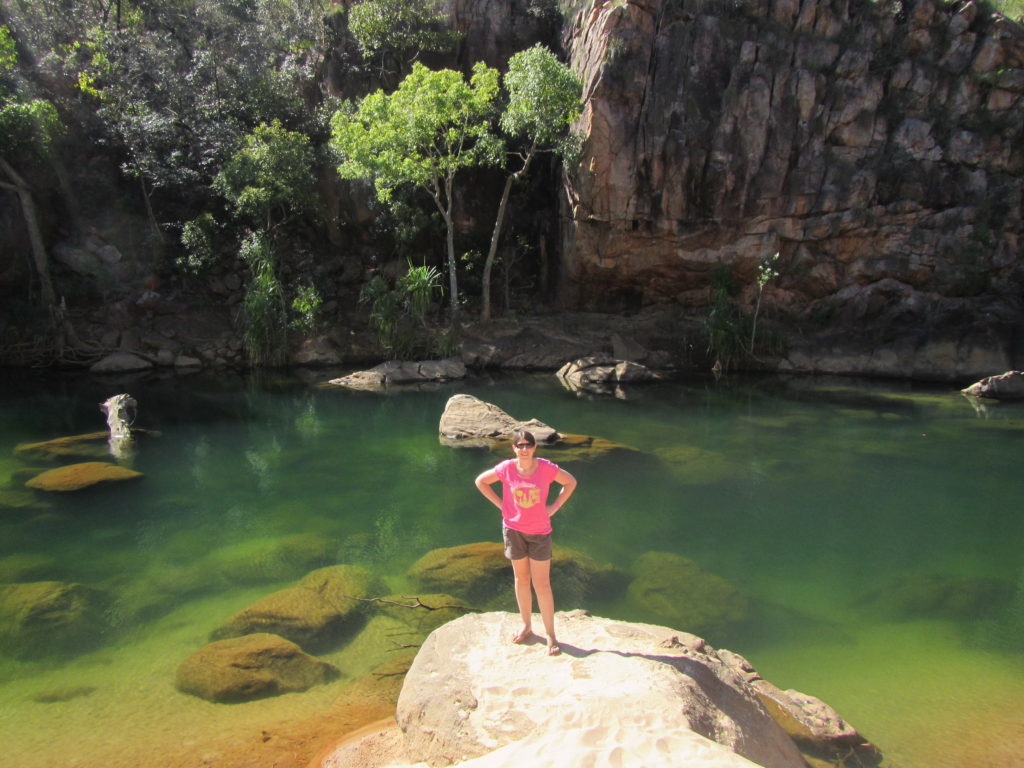 That rock is much higher than it looks in the photo

We got there, set up, then went to have a look at the river. It was amazingly clear. There was no swimming here because of possible crocodiles, but it was nice to see. The only thing that irked me a little about the campsite was the massive section reserved for ‘tour groups only’  which is fine, except there weren’t any. Meanwhile the other permit holders were forced to set up next to each other. We had run out of time to do the walk to the Gorge, so we just had a few drinks, watched the sunset, set the fire up and had dinner. Later that night we experienced this strange sensation I had not felt since being in Victoria… I remember it was called… cold? 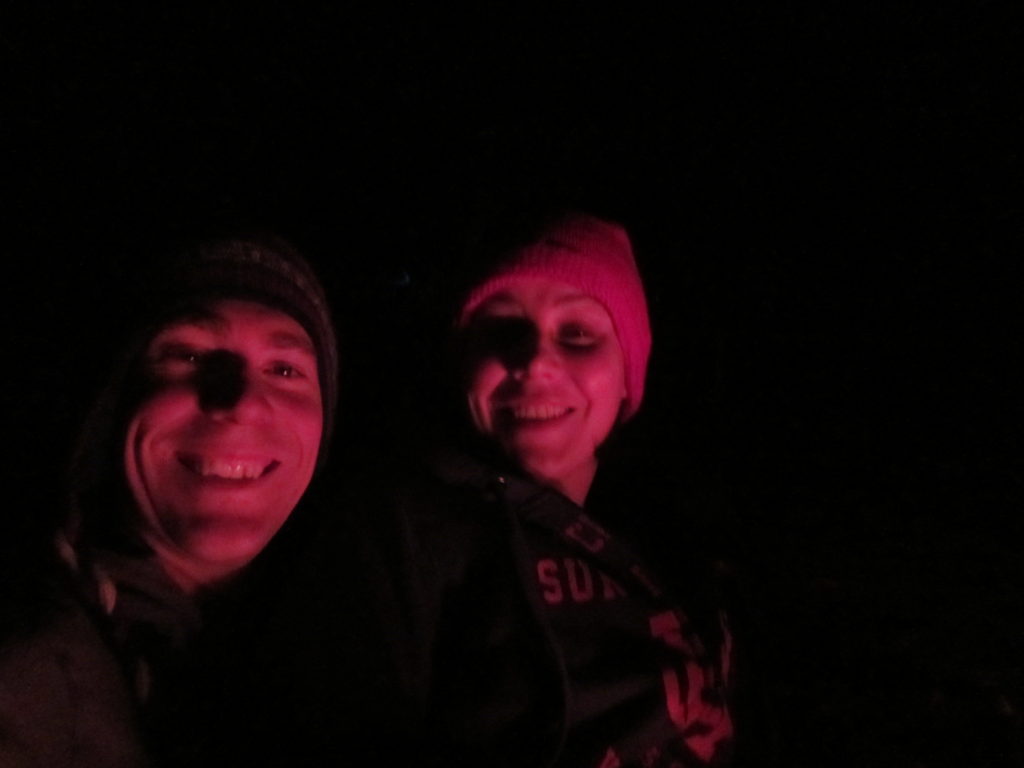 With beanies by the fire

The next morning we packed up and headed to the Gorge itself. The walk… is… not very well signposted. It would be, if you decided to read the map that you were given. But since we had been down to river and there was a big sign about the walk, and a well worn trail, I assumed that was the starting place. Maps are stupid anyway. After about an hour we hit a trail marker, which meant that
a) There were trail markers, and
b) We had not been on the trail

After that we got to the pink pool, the smaller and easier one to get to. After our long walk across a lot of rocks we decided to swim and eat here before moving to the black pool upstream. We were the only ones around which makes things that much better. We had a long swim involving jumping off some rocks, and just generally lay around. Claire was having some trying to take photos of me jumping off the rocks. She was finding it hard to time which meant I probably did it twenty times in a row. It was pretty funny, and of course, a lot of fun! 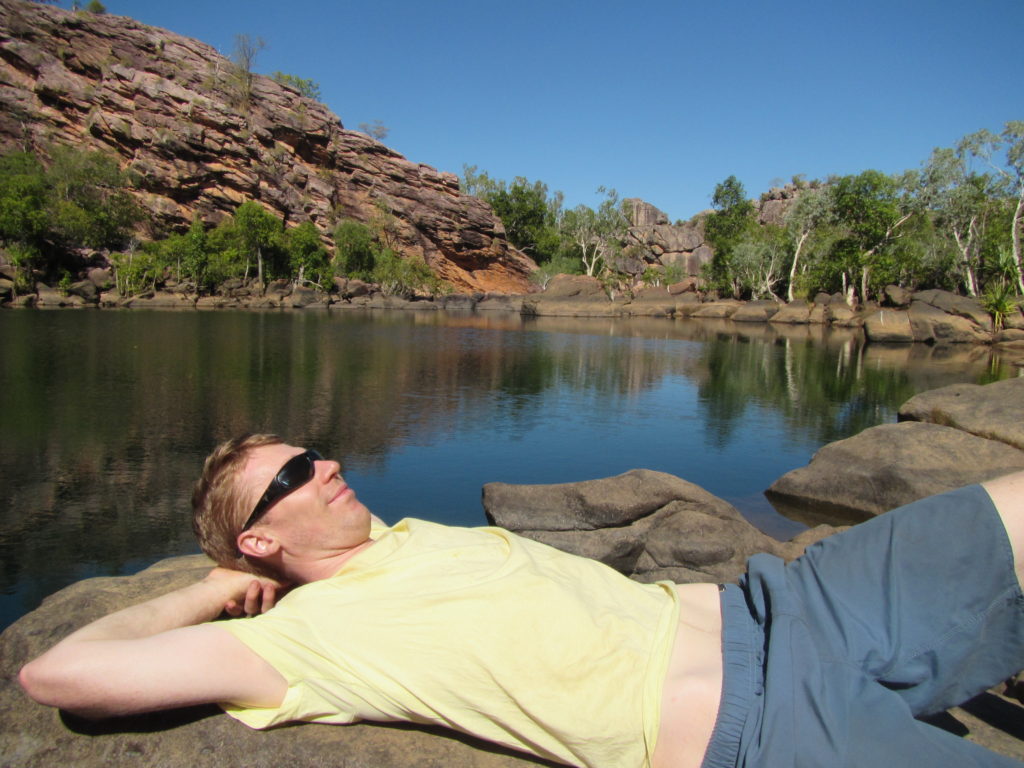 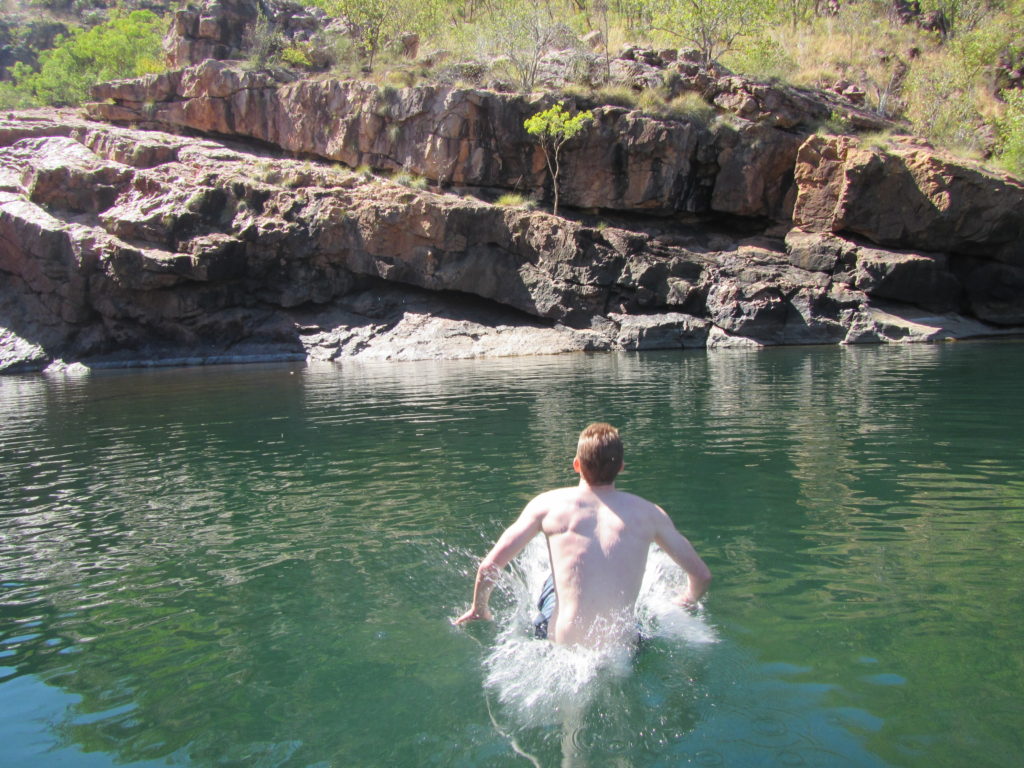 I went for a walk to check out the black pool. It was amazing, far larger than I thought it would be. I sort of regretted having spent the day in the pink pool, but the way that I figure, it gives me an excuse to go back. 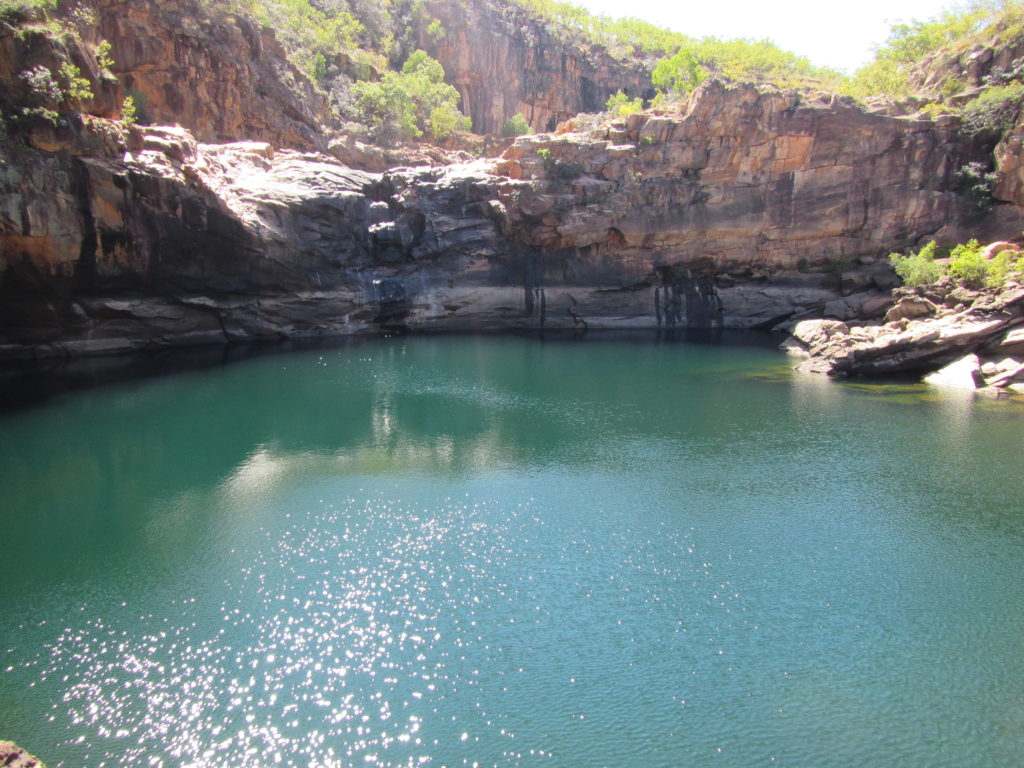 On the way back going across the correct track markets, it took about 15 minutes. Whoops. Otherwise everything went well, the new car suspension was fine, I used the roof rack for gathering a large amount of firewood and that worked well. It was great to get away, even if it was for the night, and now I’ve been to all the swimming spots in Kakadu.

Just got back from an amazing long weekend away.

On the first day we got to Douglas Hot Springs to find the camping ground was packed! I guess you can’t really expect much else on a long weekend. We found a nice spot and then went to the thermal springs. I was expecting them to be like the luke warm pools of Mataranka, but I was wrong. Parts are hot enough to burn you! Everyone sits up a bout 20 metres downstream and the water temperature is fantastic, ranging from a hot bath to cool. 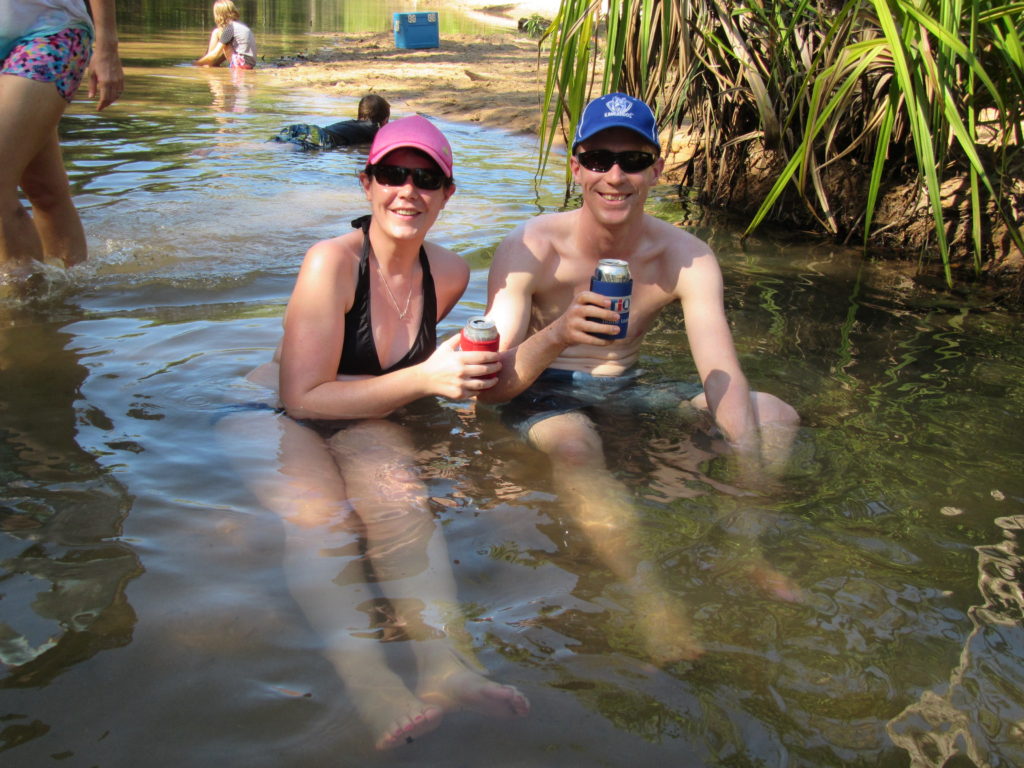 Claire and I had a swim and a drink, before heading back to camp. We were treated to an amazing sunset. I used this to take some snaps of Suzi with her new roof rack. (And everyone knows bullbars double as clotheslines). 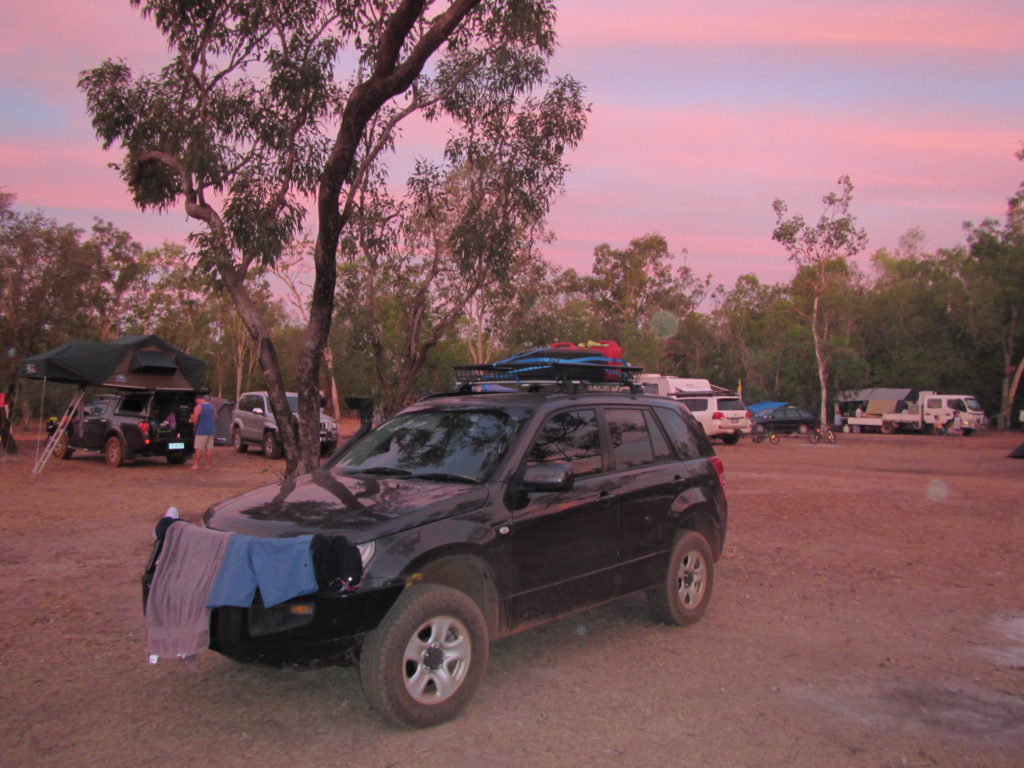 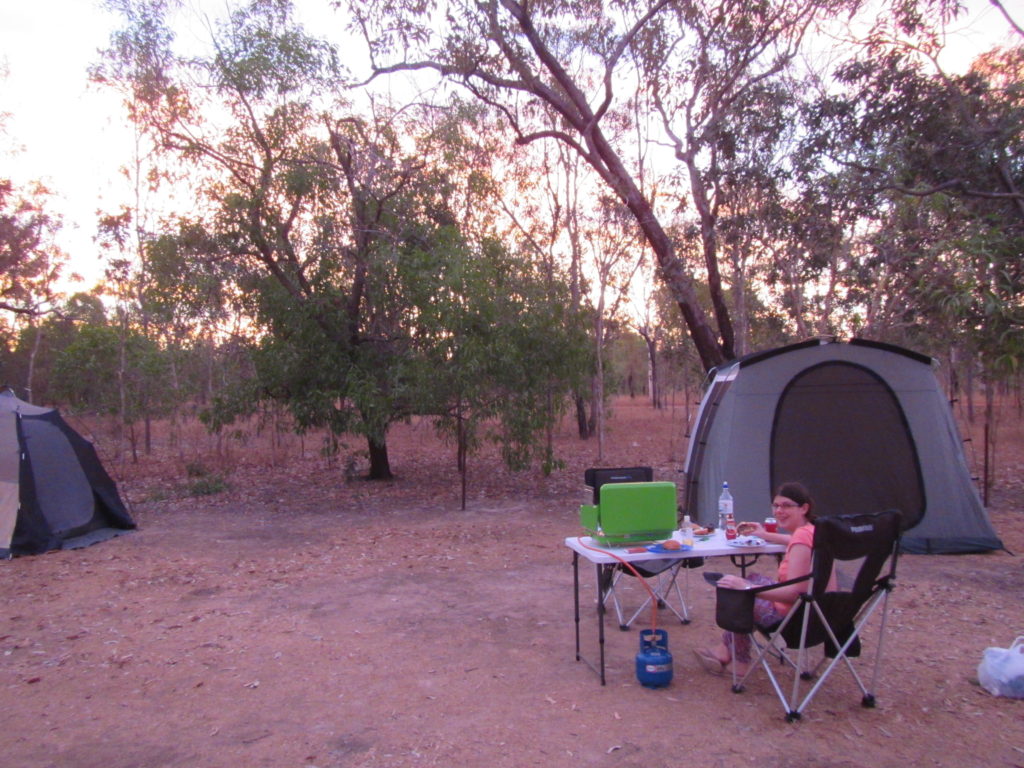 The next morning we went to Butterfly Gorge, and I managed to leave my camera at the campsite! We had been there before it wasn’t so bad. It is one of the best places to swim in the NT. I have to admit the rock hopping can get quite difficult – I am always a little relieved that Claire manages to get out uninjured.
We went back and hit the thermal pools again in the afternoon, it was much needed, as the water at Butterfly Gorge was freezing.
The Sunday night was slightly less crowded but unfortunately it brought out the camping behaviour that makes me avoid busy periods. A shame, but I would still recommend the campsite, especially to those with young children.
Got up on the Monday and headed to Umbrawarra Gorge. It took a bit of finding, but it was a really lovely spot, a nice beach next to a striking gorge. You could have spent a lot of time moving up it, but we only had a few hours, so we just had a swim and some lunch, before having to head back home. 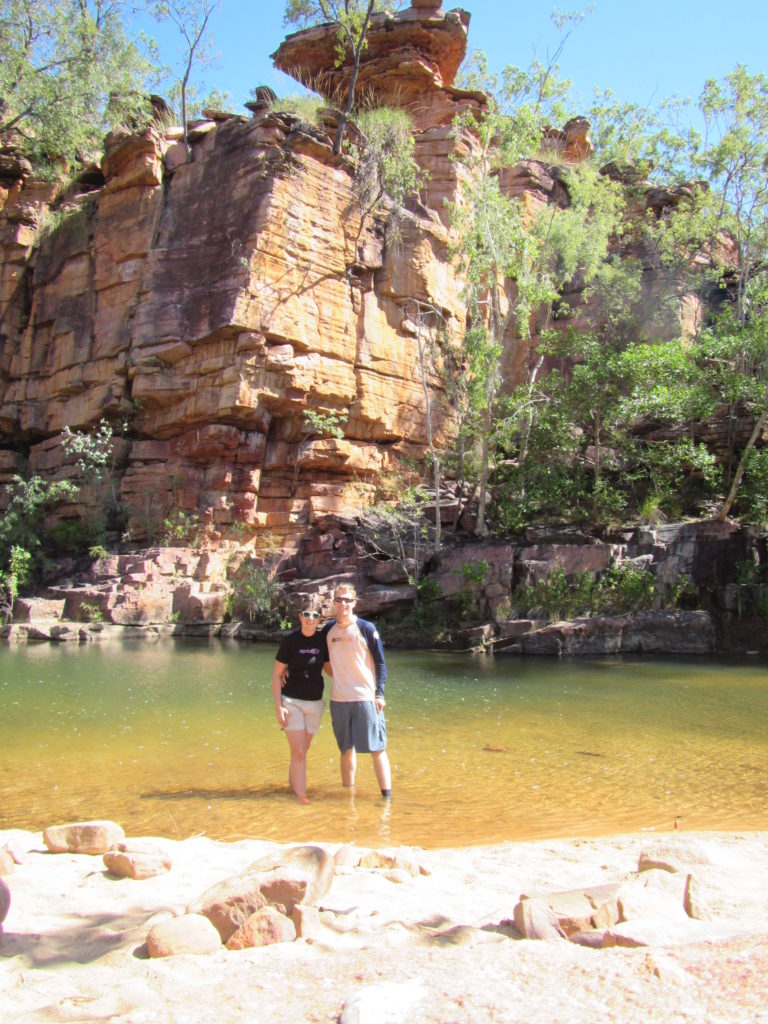 Recently friends took jobs in the school on Melville Island. We decided to use May-Day long weekend as an excuse to go and see them, unfortunately Claire and I couldn’t get Friday arvo off so we had to get the Saturday afternoon flight over. 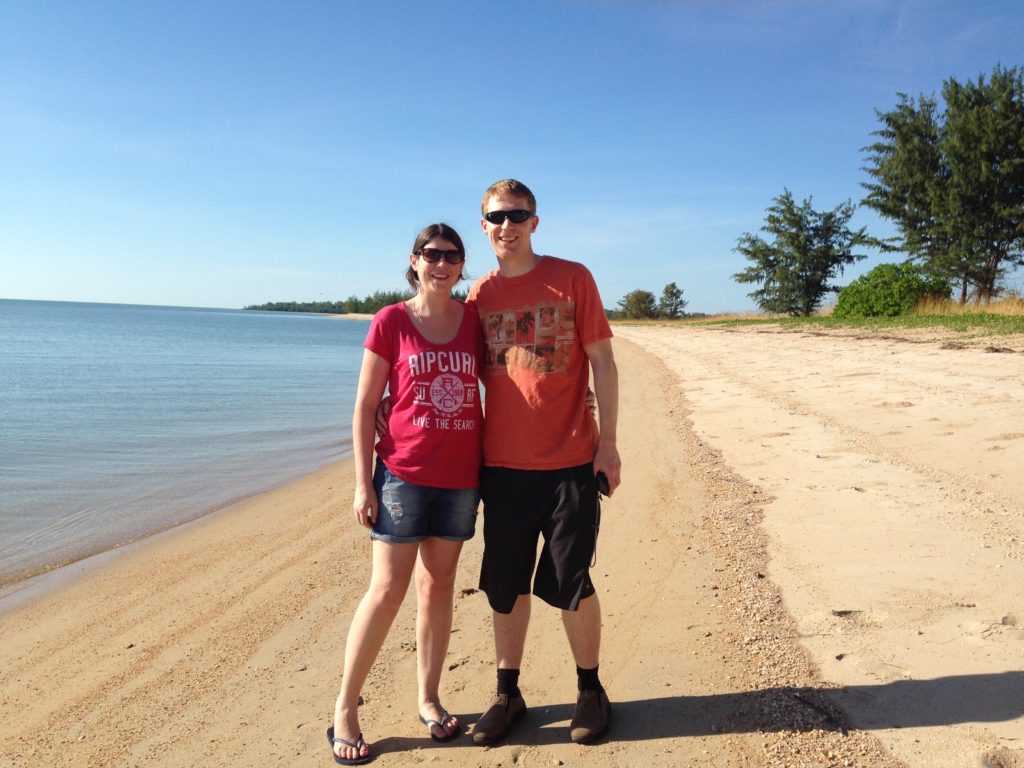 We got our permits sorted and headed over, on Sunday me and my mate spent all day in Shark Bay. He only got his boat in Easter so hadn’t really got his spots sorted yet, with that in mind it was a reasonable day. He got a nice 70cm barra for dinner and I got a lot of fish, but they were all pretty small. It is pretty eerie fishing in a location where you don’t see a boat for the entire day, and there are zero other cars at the boat ramp!

Some highlights include:
– tom hooking a huge groper and it getting itself wrapped around a snag. It was at the surface so we gave it a shot at netting it but it scared and ran, managing to break off his braid
– a kingfisher deciding to hit my lure, lucky I was running a weedless rig and it didn’t hook it
– the mist off the water on an untouched morning was pretty nice 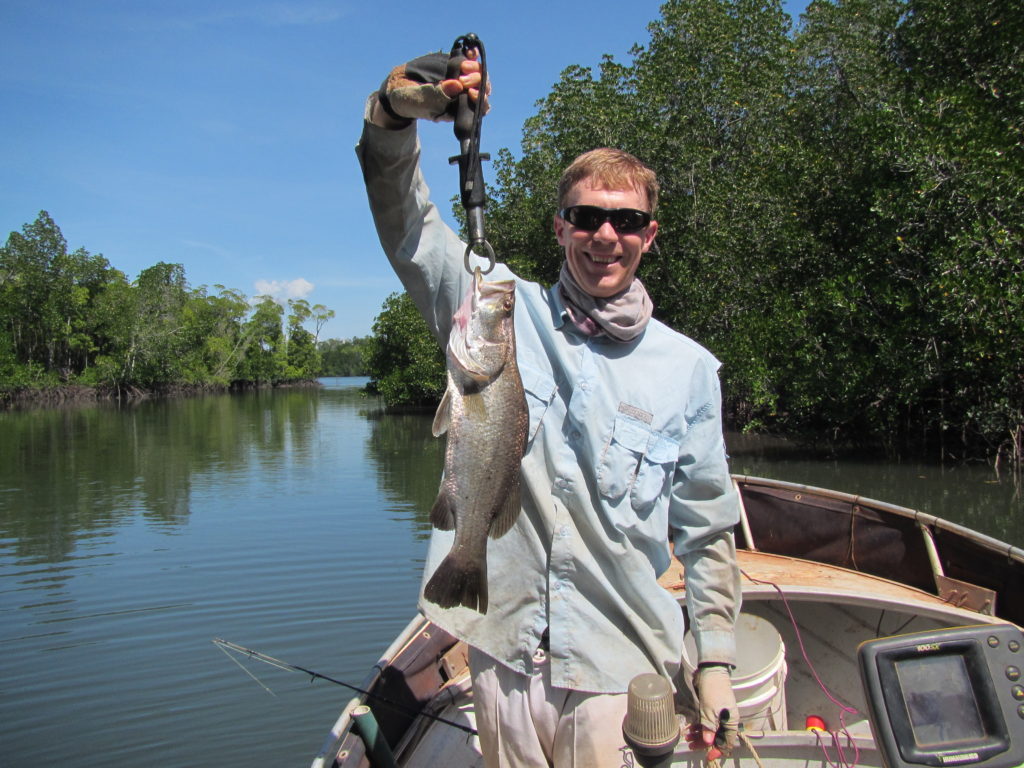 While we were off fishing Claire went to a nice waterfall for a swim. 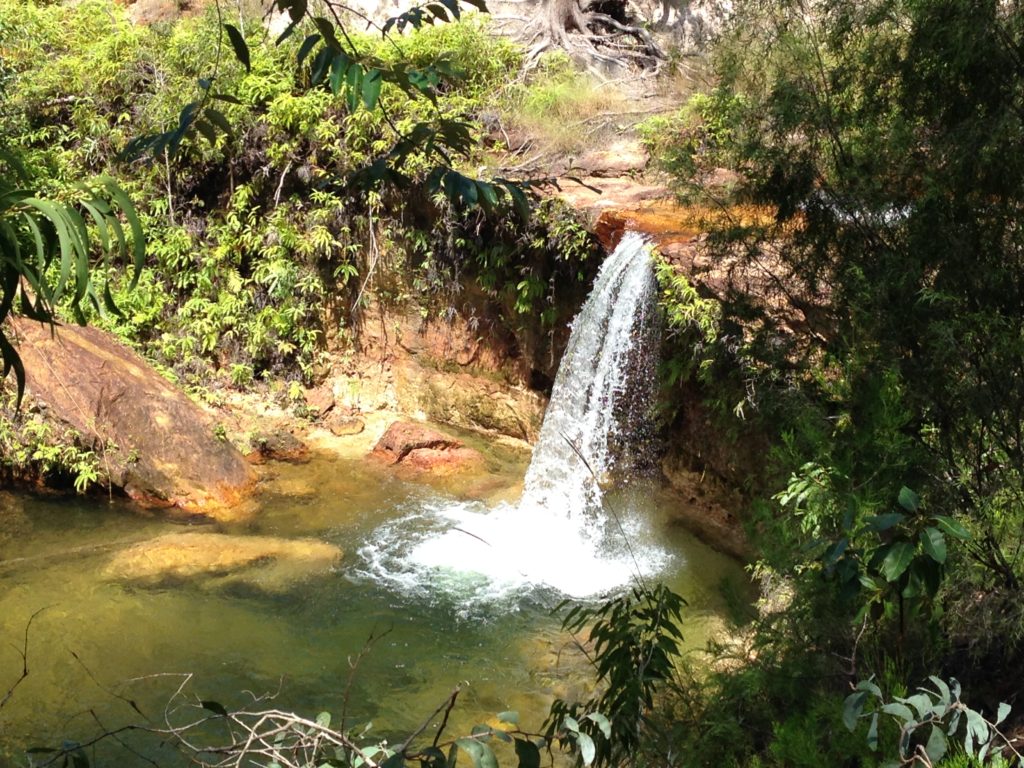 The next morning we headed to a billabong. We only had two hours fishing as we needed to get the ferry back. When we got there – devastation! The boat ramp had eroded so we couldn’t launch. Ah well, might as well cast from the shore. A few casts and I had a couple of tarpon. Then I hooked a small barra! I yelled to my mate, excited that there were barra there, and he came running with the net… looked at me like I was stupid when he saw it was 30cm.

But anyway… soon we were hooking barra each couple of casts. I estimate that most were between 25 and 40cm. It was amazing fun. I landed two thumping saratoga’s, check out the story of the trip. The biggest I would estimate to be 45 to 50… I was thinking of measuring him but got a hook in the throat so I really wanted to return him to the water asap, and the tape measure was in the car.

It is how I imagine Coroborree would have been before it became Darwin’s favourite spot.

They loved a new lure, and it gave me a chance to try some lures I’m not that familiar with, like vibes and poppers.

Story of the trip:
Banks can be hard to cast from with overhanging trees. So I threw my popper out and accidentally cast over the tree, so before I could wind I had to get the braid out of the tree. Once I did I realized I couldn’t see my popper… had it sunk? Well, as I would up I discovered a saratoga had liked the look of a popper sitting there doing nothing, and had decided to hook itself! 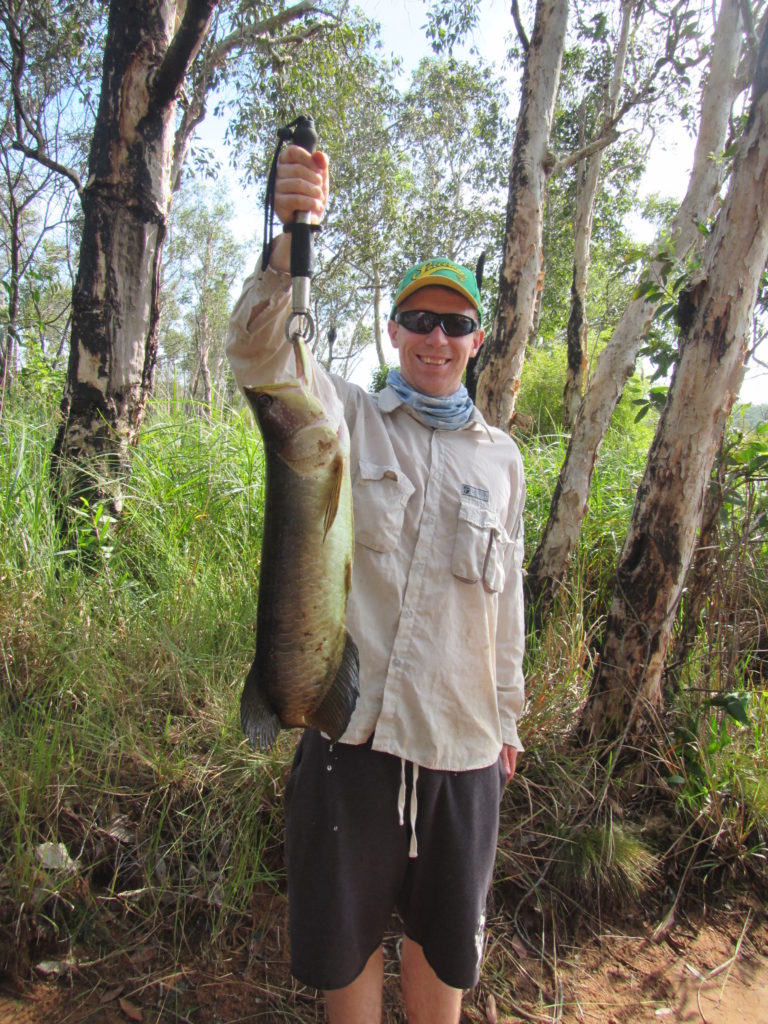